Tips for Buying Used Golf Clubs
The most fun part of starting any new activity is often getting the gear, and the same is true for golf. There’s a certain pleasure derived from going to the hardware store and picking out your first golfing glove, buying your first box of balls and of course, your first set of used golf clubs. But these days, the choices are overwhelming, especially for someone that’s new to the sport.
And while there are a plethora of very high quality golf clubs idea for beginning and budget minded golfers, there is also a thriving market for used and barely used golfing equipment that might also be suitable for a player not ready to make the equipment investment of a scratch golfer, especially if you’re not sure just how much you’re going to play or if you’ll really stick with it. So here are some tips on things to look for when shopping for used golf clubs:
Table of Contents Show
Grips:
Clubheads:
Set Consistency:
Shafts:
Prices for New Clubs of the Same Model:
Ask to Demo the Clubs:
Related

Look for cracks and worn areas in the grip. Make sure you won’t have to immediately re-grip the clubs, which can add anywhere from $5 to $18 per club to your costs. The last thing you’ll want to do is start paying for repairs before you even make it on to the greens.

Face wear is what you’re looking for. Clubs that have been used for a long time might have a shiny worn spot right in the center of the face. You really don’t want these because the clubface won’t hold the ball as well, which will be frustrating for a new golfer trying to master the basics. So make sure the grooves still have well-defined edges and stay away from clubs that show indentations in the clubface becaues these will affect the ball flight.

Line up and compare the clubs throughout the set. Make sure they all appear to come from the same, original set. You don’t want to purchase a set of clubs consisting of different shaft types and different models, or where there is not a normal progression of lengths from club to club. Mixing and matching can also throw off the progression of lofts throughout the set as well as make it difficult for you to adapt to the feel of your set. Sometimes golf courses will assemble a set of clubs made up of old sets that have lost, missing or broken clubs. While the price is attractive, you’ll be better off paying a bit more and getting a full set from one family.

Make sure the graphite shafts don’t have worn areas or other indentations that could cause weakness. Test the torque by twisting the grip and head in opposite directions. If there isn’t great resistance, it’s a sign of weakness. For steel shafts, look down the shaft to make sure it hasn’t been bent back into shape by a frustrated golfer. Also, make sure all shafts in a set are the same so the clubs feel similar from shot to shot.

Prices for New Clubs of the Same Model:

Sometimes you can find a brand new set of clubs for less than what that set is selling for used. It sounds crazy, but it happens more than you think, especially now that you have direct access to the distributors via the internet. If someone buys a set and decides to sell it a year or two later, the set may be in great shape and can justifiably be priced high. But in the meantime, the manufacturer may have steeply discounted new sets to make room for neweer inventory, because of discontinued production or numerous other reasons.

Ask to Demo the Clubs:

Just like a car, you can’t really tell how well a set of clubs will perform for you until you take them out for a few swings. Even at a garage sale, you should be allowed to at least take a few swings in the front yard (hint: use whiffle balls). Any retail shop will allow you to demo the clubs using real balls.
Good luck in your hunt!
[wpbanner id=3957]

Famous Words of Inspiration...
"The public is wonderfully tolerant. It forgives everything except genius."
Oscar Wilde
— Click here for more from Oscar Wilde
READ  A Different Perspective on Golf Swing Instruction 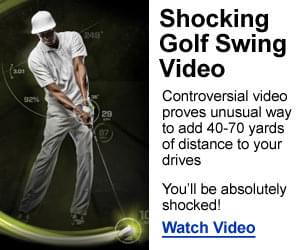